A key piece in the jigsaw of Berkhamsted’s historic environment, Rectory Lane Cemetery consists of some 1,150 monuments, 7,000 burials, 540 metres of boundary walls, over 200 trees, as well as the Memorial Arch, sexton’s hut, gatepiers and gateways.

In January, we heard that our Round 1 bid to the Heritage/Big Lottery Fund had been successful. Development Phase funding of £80,000 is allowing us to complete the Masterplan so as to release 2nd Round funding of £1 million in 2017.  In April we were pleased to welcome Ann Masat as our new Project Manager.

The inscriptions of all the headstones at the Cemetery have been recorded by the Hertfordshire Family History Society; the publication is now available on their website. A full survey of all monuments has been carried out by Michael Sheppard (pictured left) of Cliveden Conservation. Looking at the condition and significance of each headstone and tomb, we will be able to prioritise which monuments can be repaired during the HLF Capital Phase. Alan Sheldon, Bereavement Officer at Dacorum Borough Council will also be carrying out safety testing on all the monuments.

Thank you to everyone who turned up to help with the Ivy removal in preparation for the scanning of all boundary walls. (Work parties are First Sunday in the Month 2-4- all welcome!) Surveyors from Terrain have now taken detailed scans and Ian Stephenson, our structural engineer and Director of SD Structures is pulling together the final report. He has been assisted by Isla Barnard. Isla recently became the first Level 1 Diploma in Brickwork student to achieve eight consecutive distinction grades for her practical work. 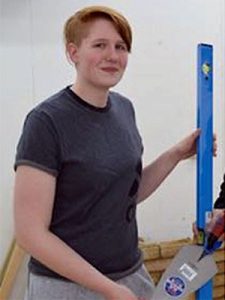 Volunteers Dave Joyner and Hugo Hardy have been opening up the Sexton’s Hut, which now has a new temporary steel door fitted. Hugo will now be drawing up the building and producing the specification for its repair. Dave has also successfully installed a colony of bees at his hive at the top end of the site.